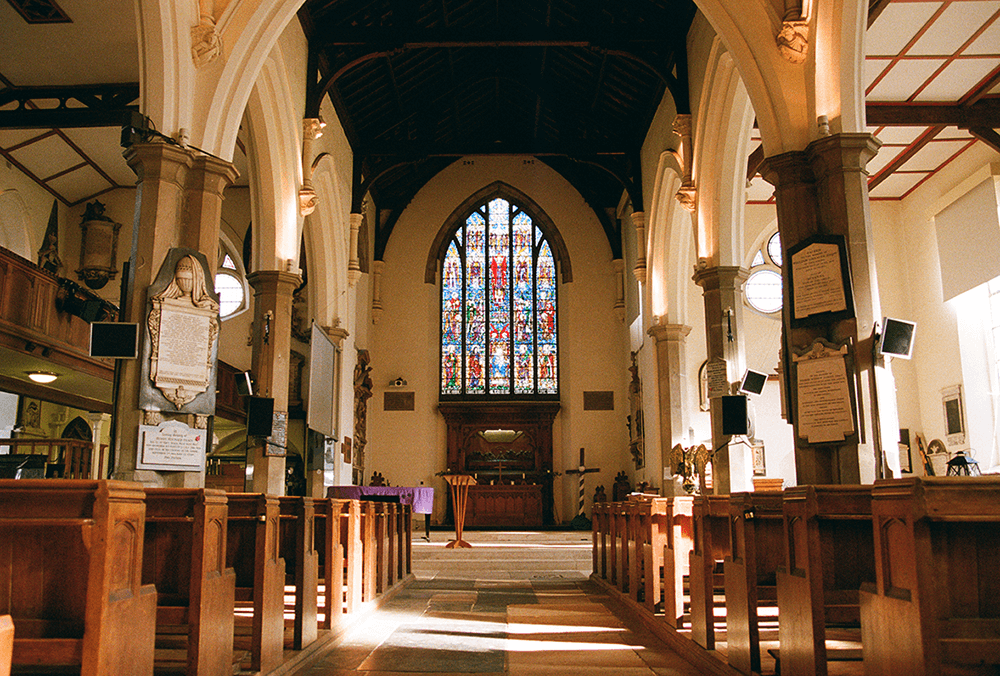 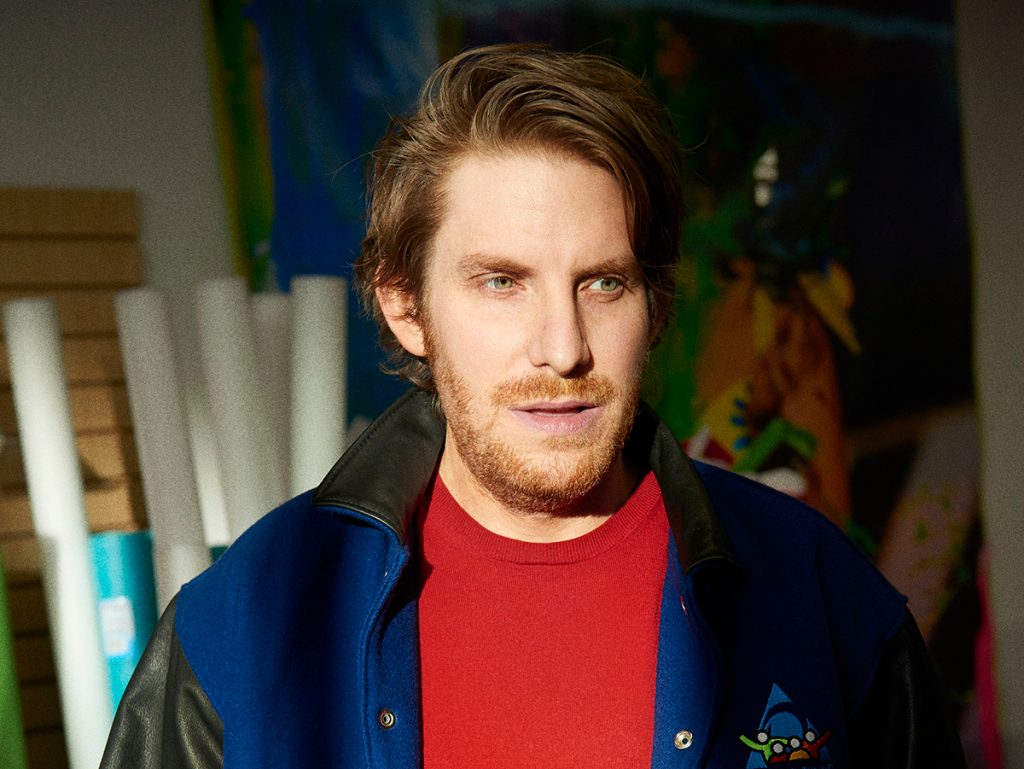 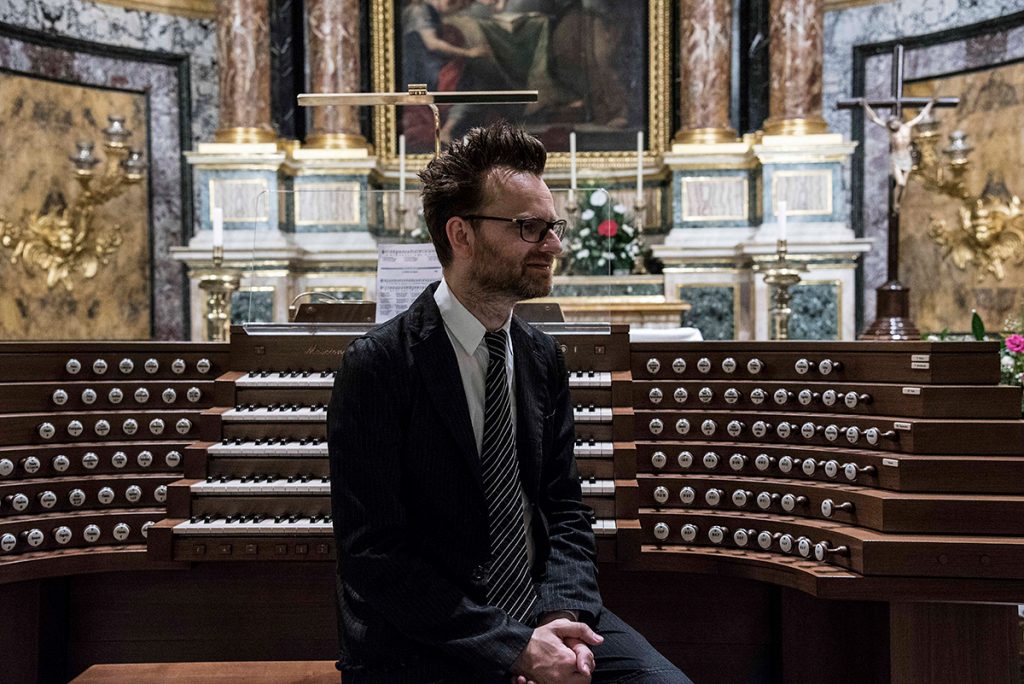 Working in collaboration, artist Cory Arcangel and organist Hampus Lindwall have invited a group of artists and musicians to compose new music in response to and to be performed on the organ of St Mary’s Church Walthamstow. They told me there would be tea will include compositions by: Ellen Arkbro, Pierre Bismuth, Kara-Lis Coverdale, Tom Crawford, Haley Fohr aka Circuit des Yeux, Hanne Lippard, Haroon Mirza, Charlemagne Palestine, Cory Arcangel and Hampus Lindwall.

Ellen Arkbro (b. 1990) is a Swedish composer and sound-artist working with intervallic harmony in just intonation. Her work includes long duration compositions as well as continuous sound environments, employing both acoustic traditional instruments as well as algorithmic sound synthesis. In 2017, Arkbro released for organ and brass on Subtext Recordings, a set of recordings of her compositions for renaissance organ, horn, trombone and microtonal tuba.

Pierre Bismuth conceptual art and appropriation art. His work uses a variety of media and materials, including painting, sculpture, collage, video, architecture, performance, music, and film. He is best known for being among the authors of the story for Eternal Sunshine of the Spotless Mind (2004), for which he won an Academy Award for Best Original Screenplay in 2005 alongside Michel Gondry and Charlie Kaufman. Bismuth made his directorial debut with the 2016 feature film Where is Rocky II?

Tom Crawford (b. 1979) Tom Crawford works with moving image, painting, print and installation to explore the politics of urbanism and the class antagonisms that go hand in hand. His video work draws on methods of abstraction, using found and original footage to construct narratives that consider nostalgia and its role in distorting the imaginable future. He completed an MFA in Fine Art at Goldsmiths’ University in 2011 and has since contributed to exhibitions and projects with Syndicate, Tenderpixel, CGP, South Kiosk, Bloc Projects, and g39.

Kara-Lis Coverdale (b. 1986) also known as K-LC, is a Canadian composer, musician, producer, based in Montreal, Quebec. Coverdale is known equally for her piano, organ, and keyboard work as she is for her experimental electronic projects; often her work integrates the two, blurring the lines between traditional composition and research-based modernism.

Haley Fohr (b. Dec 16 1988) is a vocalist, composer, and singer-songwriter based in Chicago, Illinois. Her musical endeavors focus around our human condition, and her 10-year career as Circuit des Yeux has grown into one of America’s most successful efforts to connect the personal to the universal. She is most distinctly identified by her 4-octave voice and unique style of 12-string guitar. Her mysterious “Jackie Lynn” project landed her on the cover of Wire Magazine in August of 2016. Her recent works include an Original Soundtrack for Charles Bryant’s silent film Salomé (1923), commissioned by Opera North, and a critically acclaimed 2017 album Reaching for Indigo, released on Drag City Records

Hanne Lippard (b. 1984 in Milton Keynes, GB), lives and works in Berlin. Lippard’s practice explores the voice as a medium. Her education in graphic design informs how language can be visually powerful; her texts are visual, rhythmic, and performative rather than purely informative, and her work is conveyed through a variety of disciplines, which include short films, sound pieces, installations and performance.

Haroon Mirza (born 1977) is a British artist who has won international acclaim for installations that test the interplay and friction between sound and light waves and electric current. He describes his role as a composer, manipulating electricity, a live, invisible and volatile phenomenon and adopts instruments as varied as household electronics, vinyl and turntables, LEDs, furniture, video footage and existing artworks to behave differently.

Charlemagne Palestine(b. 1947 in NYC, U.S.A.) is a co-founder of minimalism which became for him maximalism, and one of the most influential musicians of our time. He was carillonneur for the Saint Thomas Episcopal Church in Manhattan From 1962 to 1969, and released his milestone work Strumming Music for Bösendorfer Piano n 1974 and Schlingen Blängen for Organ in 1977; As a visual and installation artist he has exhibited at the Whitney Museum Nyc, Stedelijk Museum, Amsterdam, the Moderna Museet, Stockholm, at Documenta 8, Kassel, BOZAR Brussels, and the Kunsthalle Vienna and as video and performance artist at MOMA Nyc, Louvre Paris, Biennale of Venice, Royal Festival Hall, London, Serralves Museum Porto, Castello da Rivoli, Torino, Ludwig Museum Aachen and Leopold Museum, Vienna.

Cory Arcangel (b. Buffalo, New York, 1978) is a composer, artist, and entrepreneur who lives and works in Stavanger, Norway. He received a BM from the Oberlin Conservatory of Music in 2000. He is a leading exponent of digital technology-based art, drawn to video games and software for their ability to rapidly formulate new communities and traditions and, equally, their speed of obsolescence. Selected exhibitions include: “Asymmetrical Response” with Olia Lialina which traveled to the Western Front in Vancouver (2016), the Kitchen in New York (2017), and Art Projects Ibiza in Ibiza (2017), “Be the first of your friends” at Espace Louis Vuitton München, Munich, Germany (2015), “Masters” at the Carnegie Museum of Art, Pittsburgh (2012–13), and “Pro Tools” at the Whitney Museum of American Art, New York (2011). His work is included in many public collections, including the Hammer Museum in Los Angeles, MoMA in New York, the Tate in London, and Berlin’s Neue Nationalgalerie. Arcangel received the Kino der Kunst Award in 2015.

Hampus Lindwall (b. Stockholm, 1976) is a composer and musician specialized in contemporary and experimental music. He studied the organ at the Royal College of Music in Stockholm, and  under the influence of Rolande Falcinelli he moved to Paris in 2002 and studied at the Conservatoire de Saint-Maur-des-Fossés as well as the Conservatoire National Supérieur de Musique in Lyon. As an improviser he is known for his use of live electronics, doing real time sound treatment. He has premiered music written especially for him by Cory Arcangel, Noriko Baba, Edith Canat de Chizy, Raphaël Cendo, Jesper Nordin, Per Mårtensson, and has collaborated with John Duncan, Leif Elggren, Studio For Propositional Cinema and Emily Sundblad. He won the 1st prizes in the International improvisation competitions “Orgel ohne Grenzen, Air Art 2003″ in Saarbrücken, Germany, and the “Prix Boëllmann-Gigout”, 2004 in Strasbourg, France. He plays concerts throughout Europe, in the U.S.A., Canada and China, and has released albums for Ligia Digital, Clean Feed Records and Firework Editions.

St Mary’s Walthamstow is the historic parish church of Walthamstow and is situated in the heart of the village, people have gathered to worship on the site for nearly a thousand years, in recent years the church has become an established music venue, St Mary’s Music Hall.

With thanks to Lisson Gallery.